Skip to content
Enjoy 15% off your first order with the code: WELCOME15

You can get cotton bags pretty much everywhere. How did an environmental solution become part of the problem?

Recently, Venetia Berry, an artist in London, counted up the free cotton tote bags that she had accumulated in her closet. There were at least 25.

There were totes from the eco-fashion brand Reformation and totes from vintage stores, totes from Soho House, boutique countryside hotels and independent art shops. She had two totes from Cubitts, the millennial-friendly opticians, and even one from a garlic farm. “You get them without choosing,” Ms. Berry, 28, said.

Cotton bags have become a means for brands, retailers and supermarkets to telegraph a planet-friendly mind-set — or, at least, to show that the companies are aware of the overuse of plastic in packaging. (There was a brief lull in cotton tote use during the pandemic, when there were fears that reusable bags could harbor the virus, but they are now fully back in force.)

So far, so earth-friendly? Not exactly. It turns out the wholehearted embrace of cotton totes may actually have created a new problem.

An organic cotton tote needs to be used 20,000 times to offset its overall impact of production, according to a 2018 study by the Ministry of Environment and Food of Denmark. That equates to daily use for 54 years — for just one bag. According to that metric, if all 25 of her totes were organic, Ms. Berry would have to live for more than a thousand years to offset her current arsenal.

“Cotton is so water intensive,” said Travis Wagner, an environmental science professor at the University of Maine. It’s also associated with forced labor, thanks to revelations about the treatment of Uyghurs in Xinjiang, China, which produces 20 percent of the world’s cotton and supplies most Western fashion brands. And figuring out how to dispose of a tote in an environmentally low-impact way is not nearly as simple as people think.

You can’t, for example, just put a tote in a compost bin: Maxine Bédat, a director at the New Standard Institute, a nonprofit focused on fashion and sustainability, said she has “yet to find a municipal compost that will accept textiles.”

And only 15 percent of the 30 million tons of cotton produced every year actually makes its way to textile depositories.

Even when a tote does make it to a treatment plant, most dyes used to print logos onto them are PVC-based and thus not recyclable; they’re “extremely difficult to break down chemically,” said Christopher Stanev, the co-founder of Evrnu, a Seattle-based textile recycling firm. Printed patterns have to be cut out of the cloth; Mr. Stanev estimates 10 to 15 percent of the cotton Evrnu receives is wasted this way.

At which point there is the issue of turning old cloth into new, which is almost as energy intensive as making it in the first place. “Textile’s biggest carbon footprint occurs at the mill,” Ms. Bédat said. 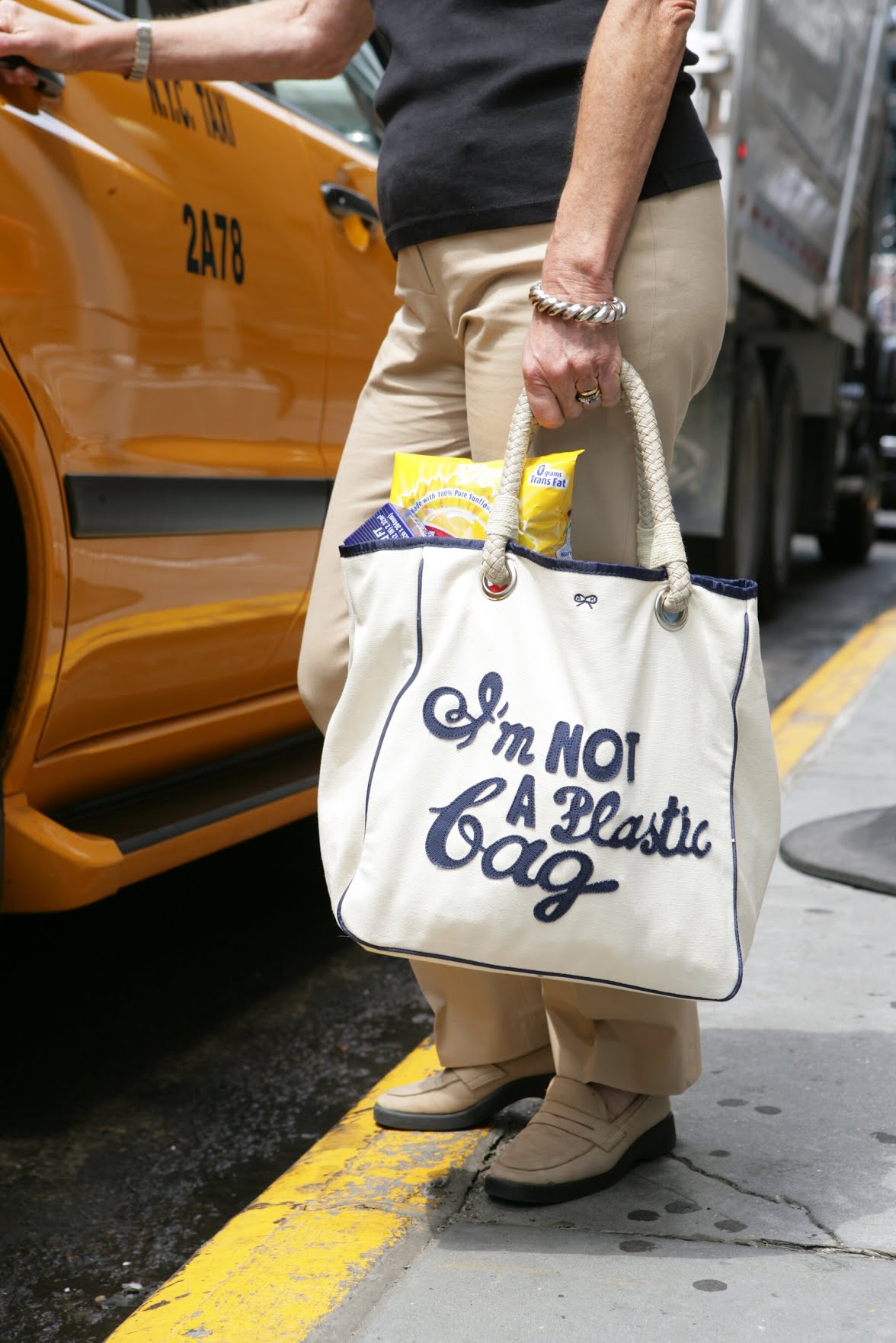 The original Anya Hindmarch tote, sold at Whole Foods for $15 back in 2007, that kick-started the anti-plastic-bag campaign. 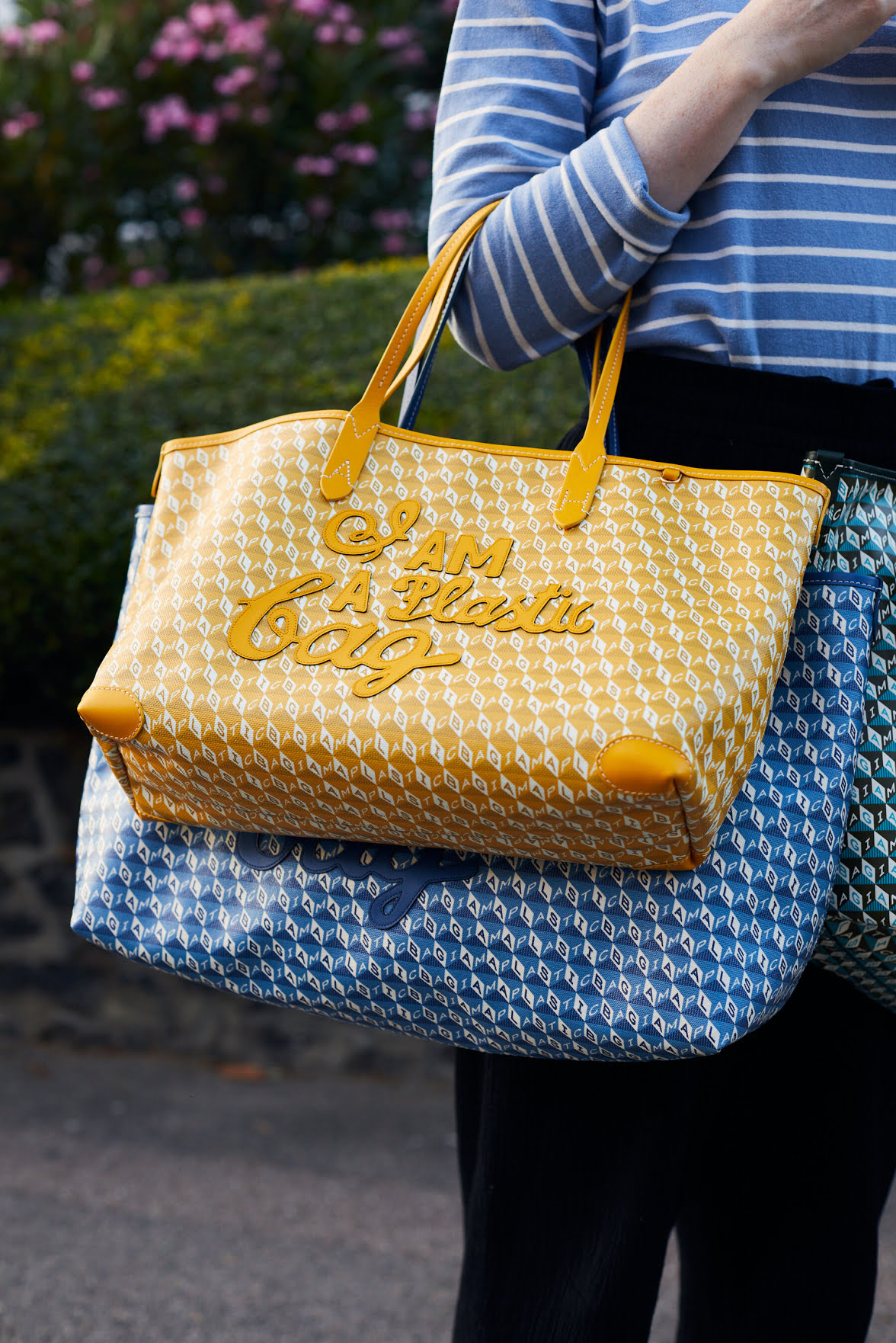 The cotton tote dilemma, said Laura Balmond, a project manager for the Ellen MacArthur Foundation’s Make Fashion Circular campaign, is “a really good example of unintended consequences of people trying to make positive choices, and not understanding the full landscape.”

How did we get here?

Arguably, it was the British designer Anya Hindmarch who put the reusable cotton bag on the map. Her 2007 “I'm not a Plastic Bag” tote, created with the environmental agency Swift, sold for around $10 (£5) in supermarkets. It encouraged shoppers to stop buying single-use bags and went effectively viral.

“Eighty thousand people queued in one day in the U.K.” alone, the designer said. And it was effective. The number of bags bought in the U.K. dropped from around 10 billion to about six billion by 2010, according to the British Retail Consortium. “It was important at the time to use fashion to communicate the problem,” Ms. Hindmarch said.

Naturally, it soon became a branding tool. The famed cream-and-black New Yorker tote turned into a status symbol; since 2014, the Condé Nast-owned weekly has gifted two million bags to subscribers, according to a spokesman for the magazine.

Kiehls, the skin care line, offers totes for $1, while fashion brands like Reformation began bagging purchases in black cotton versions; Lakeisha Goedluck, 28, a writer in Copenhagen, said she has “at least six.” Some customers get rid of theirs by selling them on Poshmark.

The idea, said Shaun Russell, the founder of Skandinavisk, a Swedish skin care brand that is a registered B Corp — or business that meets certain standards for social or environmental sustainability — is “to use your customers as mobile billboards.” It’s free advertising. “Any brand that claims otherwise would be lying,” he added. 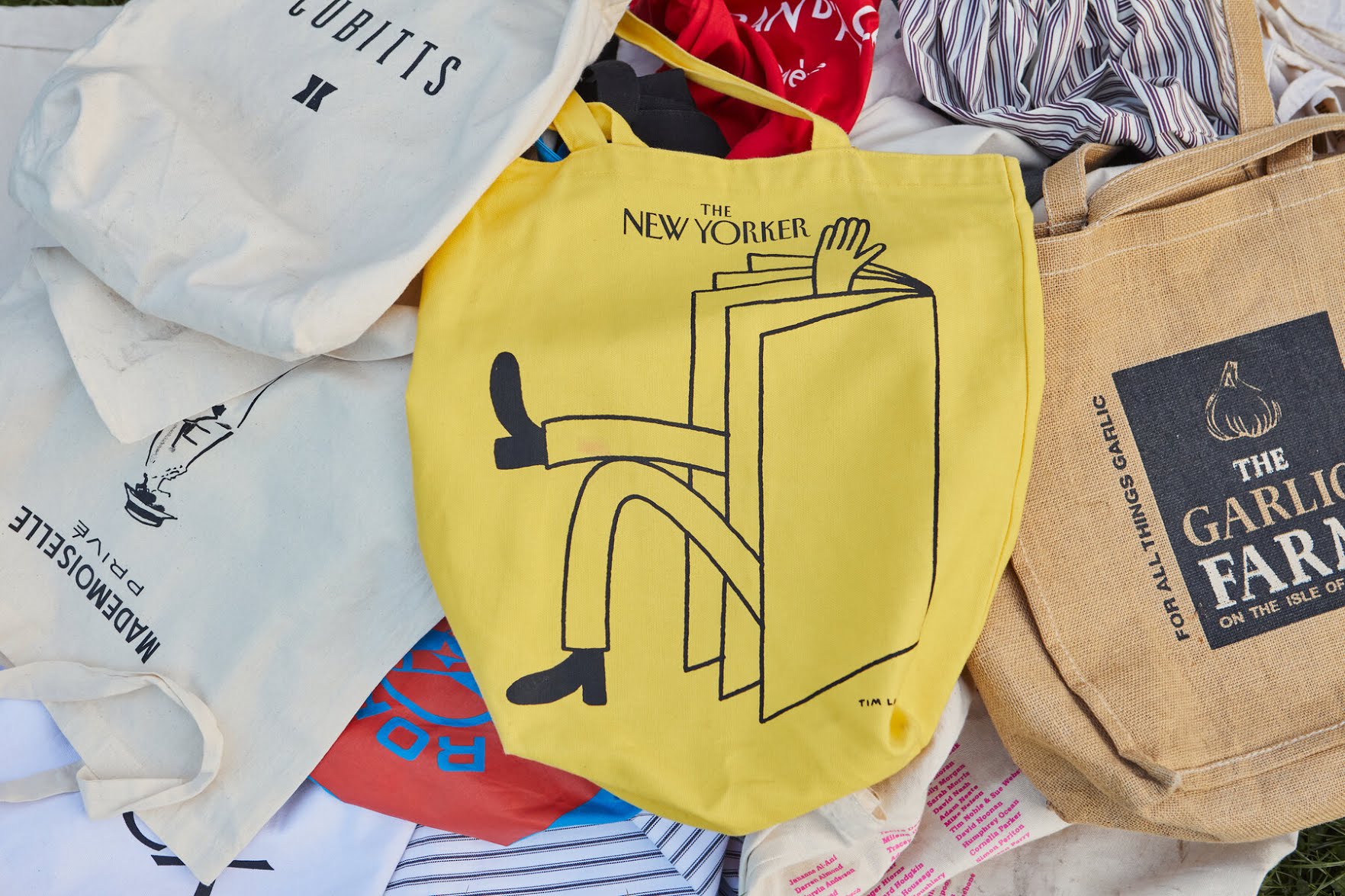 The New Yorker tote, which has become a status symbol unto itself.

Suzanne Santos, the chief customer of Aesop, doesn’t know exactly how many ecru bags the Aussie beauty brand produces every year but admitted it’s “a lot.” Aesop, which is also a registered B Corp, first introduced them as shopping bags a decade ago; Ms. Santos said customers consider them “an emblematic part of the Aesop experience.” So much so that the brand receives angry emails when they don’t arrive with online orders. “Abuse would be the right word,” she said, describing it over a Zoom call from Sydney. (Ms. Santos said customers wanting to offload their excess bags can return them to stores, though Aesop doesn’t advertise that possibility on its website or in-store.)

Cotton bags have long existed in luxury; shoes and handbags come in protective dust wrappings. But the supposed sustainability of totes means more brands than ever are packaging wares in ever more layers. Items that don’t even need protection from dust, like hair scrunchies, organic tampons and facial cleansers, now arrive swaddled in a sleeping bag.

That’s not to say cotton is worse than plastic, or that the two should even be compared. While cotton can use pesticides (if it’s not organically grown) and has dried up rivers from water consumption, lightweight plastic bags use greenhouse gas-emitting fossil fuels, never biodegrade and clog up the oceans.

Weighing the two materials against each other, “we end up in an environmental what-about-ism that leaves consumers with the idea that there is no solution,” said Melanie Dupuis, a professor of environmental studies and science at Pace University.

Buffy Reid, of the British knitwear label &Daughter, halted production of her cotton bags in April this year; she’s planning to implement an on-site feature where customers can opt into receiving one. Though Aesop isn’t halting production, the brand is converting the composition of their bags to a 60-40 blend of recycled and organic cotton. “It will cost us 15 percent more,” said Ms. Santos, but “it reduces water by 70 to 80 percent.”

Some brands are turning to other textile solutions. The British designer Ally Capellino recently swapped cotton for hemp, while Ms. Hindmarch introduced a new version of her original tote, this time made from recycled water bottles; Nordstrom also uses similar bags in its stores.

In the end, the simplest solution may be the most obvious. “Not every product needs a bag,” said Ms. Comey.

By Grace Cook from The New York Times

Feel good. Look good. And know that what you wear is “Worth The Wear”.